Not that I really went too far, but I'm still coming off my high from the yarn fumes.

I took the train into the city with Julia and her mini-knitter Emma.  We got to the Hilton around 12:30 and wandered around while looking for the coat check ($4!! ugh).  We didn't have class tickets- just wandered the marketplace for the afternoon.  Here's some of what we saw:


I love the mice climbing around.  They're proportionate to our NYC rats :o).  I also love the fire hydrant spewing water.  This water streamed through the whole display, went over the edge of the table and ended in a little swimming pool on the floor! 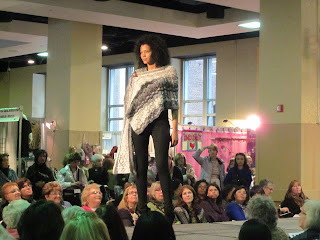 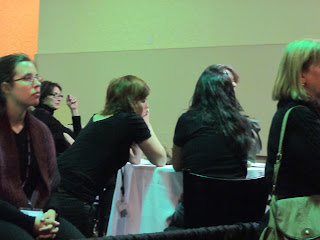 See that red head in the middle?  Vicki Howell just hanging out enjoying the fashion show.

Brian gave Julia the most amazing vicuna yarn for Christmas.  This is the scarf/shawlette she made with it. 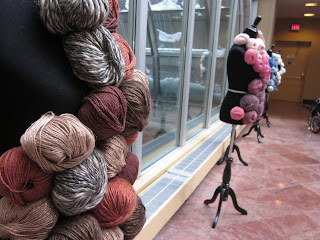 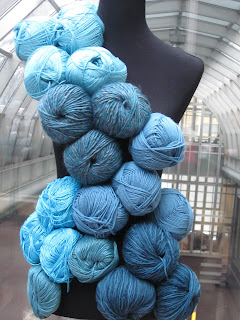 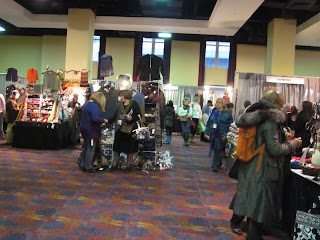 Of course I had to bring a project to work on.  Ok, I brought two, but only worked on my Carefree at the event.  My Wrist Flairs were for working on the train when I could devote a little more attention, until I got motion sickness.

At one point the elevators weren't functioning and the hotel employees brought us to the freight elevator to go down a floor (we had Emma in a stroller).  Michael delVecchio (author of Knitting With Balls: A Hands-On Guide to Knitting for the Modern Man

) come on into the elevator with us!  Except he didn't seem to be in the most social mood.  It was right after many of his garments were featured in a fashion show and he had suitcases full on his way back down to a marketplace booth.  We didn't say anything to him- he seemed a little high strung.
Overall, the event was just AMAZING.  From my limited perspective (not taking any classes or attending the lectures), Vogue did a great job.  Most of the issues I had with the event had to do with the location itself.  As was said by some people on Ravelry, the lighting in there was terrible.  You can probably tell from some of the pictures.  It just wasn't bright enough and the lighting had a funky hue.
My other issue- why oh why are they moving the event to LA next year?  Seriously?!?  Not that I'm anti-LA (ok, maybe a little), but Vogue is a NY company.  Their offices are all here.  Half the editorial staff lives in Brooklyn.  And yes, NY (and the tri-state area) has very few fiber events.  We of course have NY Sheep and Wool, but that's about it.  One could make the trek to Maryland- it wouldn't be too bad of a drive.  But honestly, that's about it for us.  I feel like the west coast gets all the fibery love and now Vogue is adding to it. Maybe next time Sock Summit will come to us here :o(
Hopefully, Vogue will smarten up and bring the event back to its home.  I heard great things about the classes and teachers so far, but have to hear from some more friends :o)
I had bought a ticket for both Saturday and Sunday.  Since I didn't stop by for any signings at the Knitty City booth on Saturday, I thought I'd get up early to head back in time for Cookie A's signing at 10 AM on Sunday.  Plus, it was an excuse to buy Knit. Sock. Love.

Surprisingly, I was the first one to get home Saturday night with Dad following not too long after.  I asked him to switch the car arrangement in the driveway so he wouldn't have to do it super early the next morning.  (I didn't want to leave my car in the road with all the snow- our streets are feeling pretty tight these days!)  Dad pulled his truck out, but my car did not want to start!  The dashboard lights were on one second and the next, nothing.  I took it as a sign that I should not be going a second day and spending more money.  Good thing since I don't even know where I'm going to put all the stuff I bought!  Come back tomorrow for that post :o)
PS- My car is fine!  The cable came off the battery.  It's too rusted to tighten any more so I have to keep an eye on it for the rest of winter until we can replace it in the spring.
Posted by crookedknits at 6:13 PM

Guilty Pleasures (aka my LYS)

This is a Flickr badge showing public photos and videos from crookedknits. Make your own badge here.

What do you love?